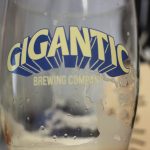 Beer, a new coffee beer festival from Sprudge and Stumptown Coffee Roasters. Tickets are on sale now, with a portion of proceeds benefitting the Houston Food Bank. Breweries across Oregon are collaborating with Stumptown on a series of one-of-a-kind coffee beers; we profiled a frankly delicious new Guji Gose from Breakside Brewery earlier in this series. Today we’re checking out another one of the featured beers, this time from Portland’s Gigantic Brewing Company. Gigantic is a true Portland indie beer story, keeping things small and craft at their SE Portland brewery and tap house, brewing up what they call “the best damn IPA in Portland” along with a slate of seasonal and one-off rare beers. What’s your approach to beer?

I brew what I like to drink, and really like to try new beers and work to continually expand the types of beers we make, explore new flavors and techniques. I always strive for balance in our beers and don’t want any one thing to dominate. Also, I want the drinker to enjoy a snifter, glass, or pint (whatever the serving size is) and want more—because they enjoy the beer, but also because it’s balanced.

At Gigantic we’re always working to get better at what we do day to day. There are always small ways to improve and new ideas to test. Tell us about the base beer you used for this coffee beer?

SOLID! is our hoppy American wheat beer we made for summer. SOLID! has a bright, fresh citrus hop aroma and flavor, with a distinct orange peel bitterness in the finish. It’s hopped with Citra, Simcoe, and Cascade.

How have you chosen to work the Cold Brew into that beer?

We selected Guji because of the fruity and subtle citrus notes it has. Brent at Stumptown cold brewed the Guji and we are going to add it to the finished beer. We settled on 6% cold brew by volume after trialing it in a few different ratios. It’s a level where the coffee and the hoppiness of the beer meld perfectly together, neither aspect dominating. What’s the end result like? Does it have a name?

It’s a well-balanced blend of the Guji coffee and the citrusy hoppiness from the beer. It delicious and is definitely a drinker, meaning you could enjoy a couple pints. We call it SOLID Guji!

Do you have an all-time favorite coffee beer?

We made a coffee beer a few years ago called Too Much Coffee Man. It was an imperial black saison and we added cold brewed Kilenso coffee from Coava. What I thought was cool about that beer is that the roasty “coffee” notes came from the beer, specifically the malts that we used, while a lot of the delicate fruitiness came from the cold brewed coffee. It definitely wasn’t your standard stout with roasty coffee layered on top. Kilenso is a naturally processed Ethiopian coffee that has amazing fruit notes. We’re actually making Too Much Coffee Man again this year, and will release it this fall. What’s one thing that most people don’t know about craft beer, that you wish was better understood?

I really feel that largely people understand what craft beer is in most parts of the country now, and especially here in Portland.

Beer, a new coffee beer festival from Sprudge and Stumptown Coffee Roasters. Tickets available via EventBrite, with a portion of proceeds going to the Houston Food Bank.

Jordan Michelman is a co-founder and editor at Sprudge Media Network. Photos by the author.