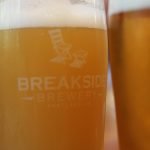 We’re counting down the days until Coffee

Beer, a new coffee beer festival from Sprudge and Stumptown Coffee Roasters happening Saturday, September 16th in Portland, Oregon. In the lead up to the shindig we’ll be profiling a couple of the exciting coffee beer collabs happening around town for the fest, starting with Portland’s own Breakside Brewery.

Breakside Brewery’s Brewmaster Ben Edmunds has a long-standing reputation for beery experimentation, releasing 120+ beers a year across Breakside’s three breweries in metro and suburban Portland. The beers range kaleidoscopically across a vast constellation of standard and special edition bottlings, from complex wood-aged sour and wild limited releases, to the local day drinking favorite Lunchtime ISA, to a Passionfruit Sour that won gold at the 2017 Best of Craft Beer Awards to a tiny, truly exceptional program of farmhouse saisons and rye wine aged in brandy barrels. Along the way, they’ve become a local favorite and beer list standard across the Portland restaurant scene, with no better place to quaff the stuff than their brand new Slabtown neighborhood brewery and tap house, outfitted with two 10bbl fermenters, three 20bbl fermenters, outdoor seating, and a robust food menu.

Here’s a bold statement: Breakside is for sure one of the best breweries in Oregon, and possibly the very best. We’ve rolled these beers up snug in t-shirts and packed them tightly in trunks to bring along and share with friends around the coffee world over the last few years, much to the delight of assorted dinner companions. And so I was thrilled to tag along to a blending session with Edmunds and Breakside Director of Brewing Operations Jacob Leonard, who worked alongside Stumptown Director of Cold Brew Brent Wolczynski to develop the beer we’ll be featuring at Coffee Loves Beer. From there I followed up that session with an interview with Edmunds and Leonard, who answered my questions collaboratively, to learn more about their approach to brewing and what we can expect from their newest coffee beer, available September 16th at Coffee Loves Beer.

What’s your approach to beer?

Fundamentally, we’re generalists at Breakside and adopt a “big tent” approach to brewing. What I mean is that we don’t specialize in just one style or brewing tradition—farmhouse ales, German lagers, or wood-aged sours, for example. In any given year, we’ll release over 120 different beers from across our three breweries. Constant tinkering and experimentation are in the water at Breakside, but there are some aspects of brewing that I think we focus on across all of our brands: drinkability, focus of ingredients, and composition/balance are hallmarks of all of our best beers, I hope. Tell us about the base beer you used for this project?

We’ve brewed a pretty classic German-style gose for this project. Gose, as its been interpreted in the US, is definitely more sour than what you’d find in Germany, and this beer definitely follows that path as well. That said, it’s not screamingly sour—more like a gose/Berliner Weisse hybrid. We use a touch of sea salt and coriander, which are traditional for the style as well. I think gose is a great platform for “additional flavors,” since there is just a lot to latch onto and play off of while still maintaining the integrity of the base beer beneath. You’ve got sour, salty, wheaten. How have you chosen to work the Cold Brew into that beer?

We make a number of different coffee beers each year and we’ve tried numerous different methods of adding coffee to beer. At this point, our preferred method is to get high-quality, concentrated cold brew and blend it into the finished beer when it transfers to the conditioning tank.

What’s the end result like? Does it have a name?

Light, fruity Ethiopian coffee plus medium acidity and hints of coriander and salinity from the beer. It’s unconventional, but all of the flavors are complementary. This is definitely one of the more “high-concept” beers we’ve done in a while, and I’m sure there will be some folks who hear the words “coffee gose” and think that it’s going to be a novelty beer or a mess. I’m pretty confident it will be better than that. We’re going for “incredibly pleasant surprise.”

The working name is “Guji, Guji, Louis, Louis, Fendi, Fendi, Prada,” but that may change by the time the fest happens. We often end up changing beer names at the last minute, which the warehouse and fulfillment staff just love. Do you have an all-time favorite coffee beer?

I don’t know that I have an all-time favorite. System of a Stout from Beachwood Brewing (from Los Angeles/Long Beach) is a great beer that uses Turkish coffee as an influence. Koffee Kream Stout from Comrade Brewing (Denver) is also excellent. Amongst Breakside beers, I’m partial to our Vienna Coffee Beer, which uses Stumptown’s Ethiopian Nano Challa. We release that beer on draft every year, and I think it’s a beautiful balance of rich malt and bright coffee. It tastes like maple syrup and waffle cone.

What’s one thing that most people don’t know about craft beer, that you wish was better understood?

If consumers knew more about how warm storage can wreck most beers, and if consumers refused to buy warm-stored beer, I think that would be a major victory for beer quality. Beer, a new coffee beer festival from Sprudge and Stumptown Coffee Roasters. Tickets available via EventBrite, with a portion of proceeds going to the Houston Food Bank.

Jordan Michelman is a co-founder and editor at Sprudge Media Network. Photos by the author.