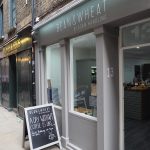 Global warming is real. Food waste is causing all kinds of havoc. We don’t need scientists, or politicians even, to remind us. And the cognoscenti of the caring food and hospitality industries continue to search out ways to not worsen the crisis. One such bloke is chef Adam Handling, who recently opened Bean & Wheat in London’s Spitalfields. Bean & Wheat’s philosophy, similar to Handling’s other restaurant The Frog E1, is to only source local ingredients—including, in this case, a focus on coffee roasted here in London.

“London is full of people that respect food. It can also be very fast-paced, and I think a lot of us survive on caffeine,” says Handling. “In all seriousness, I think Londoners are willing to spend that little bit more on products that are ethically and thoughtfully produced.” While Handling is feeling rather optimistic about coffee as a whole—“I think large-scale coffee production is going to start decreasing in popularity, with speciality coffee taking over as the mainstream choice,” he says—climate change remains an issue for coffee as with so many other things. It will, says Handling, “have huge implications for the growth of coffee as it affects the delicate ecosystems which are integral for quality coffee production.”

In keeping with an earth-conscious mindset, Bean & Wheat is also zero-waste. “I don’t feel like anyone else in the city or country is being as practical as we are about our zero-waste policy,” he adds. “Using not just our own kitchen waste but branching out further to the fruits that would be thrown away for not being aesthetically pleasing enough and creating an entire juice range from the would-be wasted fruits, I feel shows real determination to utilise the potential of the ingredients we have available to us on a level I feel no one else has quite reached.” All the drinks here are espresso-based, prepared on a workhorse La Marzocco Linea Classic. Iced lattes have been popular, and Handling soon hopes to add filter brew options to the menu.

Their coffee partner in all of this good work is Union Roasting Coffee. “They provide farmers in the countries they work in with great opportunities and the chance to become speciality coffee producers,” smiles Handling. “What’s great about them is that they don’t just search for already established coffee growers, they find areas with possibility and work with farmers to help them use the land to its greatest potential. Their ethos goes hand in hand with ours.”

Right now some of the shop’s coffee grounds are sent offsite as part of their compost, which is used for growing fruits and vegetables for the restaurants. But they also use it in a nitro tiramisu: using chocolate truffle and a shortbread base, 50% of the coffee grounds, and then dehydrating other grounds, blitzed into a fine powder and sprinkled over the top, “giving the tiramisu a really intense coffee flavour,” says Handling. And they’re also hoping to start making hand soap from the ground coffee at some point—great for exfoliating and the environment. Alongside coffee, there is also a range of potted products—from duck liver parfaits to chicken butter. “All the products are made using by-products from The Frog [restaurant], ensuring waste levels are kept to a minimum and nothing which has the potential to create some great tasting food is thrown away,” says Handling.

“As I’m sure any chef could tell you, being a chef and working full-time in busy restaurants can be hard work, so you can’t help but fall down the coffee hole,” says Handling. “Especially in London, coffee is such a big part of the culture here,” he says. And at Bean & Wheat, the two are tied together in a loving knot.

The post Coffee Conscious At Bean & Wheat In London appeared first on Sprudge.