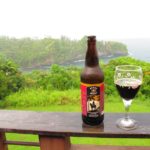 We’ve all heard of Kona coffee; real coffee nerds know the quality Hawaiian-grown coffee action is happening closer to Kau, home to folks like Rusty’s Hawaiian. But on the Big Island of Hawaii, there’s another local product that’s got island residents and visitors excited, and that’s beer. Big brands like Kona Brewing Company have an international following, but there’s killer little indie breweries all over Hawaii, and on a recent trip to Hilo—on the rainy side of Big Island—I helped myself to a tasty beer or three from Big Island Brewhaus, just up the road in Waimea.

That’s where founder and brewmaster Thomas Kerns is brewing up a bevy of different beers, some you might expect—there’s a coconut cream ale, and an easy-drinking session beer perfect for the beach—and some you can only find here on the Island, like the “Jabba Da Sour,” a sour beer brewed with local jaboticaba fruit (it tastes like sweet grape juice), or the “Big Mac Nut Brown,” a brown ale brewed using local macadamia nuts, then aged in Maker’s Mark whiskey barrels.

But happily enough—and crucial for our purposes here—I was able to score a nice 22-ounce bottle of Big Island Brewhaus’ White Mountain Coffee Porter, a collaboration with White Mountain Coffee on the Hamakua Coast. It’s a cool, smooth take on the coffee porter style, with creamy notes of coconut and a long, complex finish. Perfect for a rainy Hilo sunset. To learn more, I chatted with Thomas Kerns of Big Island Brewhaus, who spoke with me digitally from the Big Island.

Hey Thomas! Thanks for talking with Sprudge. For starters, why go the porter route for your take on coffee beer?

Our porter comes alive with coffee and toasted coconut. When I make coffee, it’s Hawaii’s best coffee with honey and coconut milk instead of cream or milk. The combination of coffee and coconut play off each other and add layers of complexity to the White Mountain Porter.

Have you ever brewed any other takes on coffee beer for Big Island Brewhaus?

We do several coffee beers throughout the year: Irish Breakfast Beer (Irish Stout with coffee), Coffee Cream Ale (cream ale with coffee), and our White Mountain Porter you tried. How did you find this particular roaster to work with?

White Mountain Coffee is a multiple award winner, and one of our favorite choices for coffee. It’s grown and roasted on the Hamakua Coast of the Big Island by David Steiner, and so we decided to name our beer in line with the coffee for mutual recognition.

In what form did you add the coffee? Was it brewed and added to the beer after brewing, or did you condition using whole beans, or…?

We use a few techniques of cold press coffee and steeping fresh grounds in the beer itself. We always use a coarse grind.

How about the coconut—what form of coconut did you use for brewing this?

We use coconut chips. We toast them in the oven to a golden brown which releases light delicate oils and flavonoids. Then we steep the toasted coconut in chilled nearly finished beer. Describe the town where you brew, Waimea, for folks who might be unfamiliar with the Big Island.

Waimea is an upcountry community with a history heavy of Hawaiian cowboys and the Parker Ranch. We are around 2,500 feet above sea level, which makes for nice, cool evenings to encourage imbibing in delicious beers.

Can folks find your beers outside Hawaii?

We only distribute and sell in Hawaii, in draft kegs and 22-ounce bottles. You may find us at a festival now and then on the mainland. We love to share the aloha, and we regularly attend festivals like the Great American Beer Festival and the Shelton Brothers Beer Festival. We were recently poured at an event in Kentucky and the year before in Tuscany, Italy.

Thank you, Tom! Big fan of the beers.