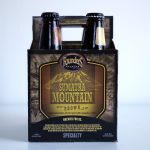 Grand Rapids, Michigan based brewery Founders Brewing Company have a way with coffee beers—the brand’s Kentucky Breakfast Stout (KBS) is highly sought after in the craft beer community, and Founders’ new Sumatra Mountain Brown is a worthy addition to that lineage in this, the 20th-anniversary year of the storied brewery.

A collaboration between Founders and Ferris Coffee, also of Grand Rapids, the Sumatra Mountain Brown clocks in at 9% ABV. It’s a slow-drinking, deeply complex coffee beer, perfect for dessert or in a bottle share setting. Best of all, unlike many of the coffee beers we’ve featured this year on Sprudge, Sumatra Mountain Brown enjoys wide distribution across the United States—if you’re reading this in America, chances are you can find this near you.

To learn more about the Sumatra Mountain Brown we spoke with Sam Mirto, Director of Coffee at Ferris and Jeremy Kosmicki, Brewmaster at Founders. Hey Sam and Jeremy, thanks for talking with us. First question is for Sam—when you’re working on a coffee beer like this Sumatra Mountain, how collaborative is the process? Do you hang out with the Founders team and work on blending? Are you going as far as to roast or even source the coffee specifically to fit the beer?

Sam Mirto: The process is very collaborative. The first part of the process is conceptualizing the beer, talking about style, variations of style, what the Founders team wants in the final product, and what coffee can add to the beer. We then begin sensory analysis with the team at Founders and cup through several coffee possibilities. As a coffee professional, I personally think it’s incredibly beneficial to cup coffee with a team that does sensory analysis in another beverage industry. I think it opens your mind to experiencing coffee in ways that might not occur to us in the industry. Also, brewers use different descriptors and adjectives to describe what they’re experiencing in coffee, and that helps me build my sensory lexicon as someone who cups coffee often. In many cases, we do end up tailoring a roast specifically to achieve the desired outcome for the coffee in the beer. How many different coffee beers does Ferris collaborate on right now?

SM: We currently work with over 20 breweries, many of which brew multiple coffee beers with our coffee, so it’s hard to say exactly. With Founders alone over the past year, we’ve collaborated on Pale Joe, Breakfast Stout, Kentucky Breakfast Stout, Sumatra Mountain Brown, and several taproom-only coffee beers.

Gotta love the taproom exclusives. Next question is for Jeremy—for the Founders Sumatra Brown, how do you work to implement coffee in the brewing process? Is brewed coffee added to a completed beer, or do you add coffee at a different step of the process?

Jeremy Kosmicki: We use coffee in a variety of different ways around here—sometimes on the hot side, sometimes post-fermentation, sometimes both! We’re going to keep the details of this one to ourselves, though. Proprietary!

What can you tell us about how the different styles of malt in this beer pair or contrast with the use of Ferris’ Sumatra coffee?

JK: We’re going after nutty, toasted malt flavors with this beer that create a sweet, sturdy backbone and really let the coffee flavors take center stage. With a stout or porter, there are malts used that are quite similar to coffee in flavor, so sometimes they’re hard to distinguish. Going with a brown ale for a base allows you to detect more coffee nuances that might get lost in a stout.

Sam, what specific flavor elements do you think that Sumatra coffee imparts in this beer?

SM: I think the coffee adds layers of caramel and nut, a creamy mouthfeel, and some depth of flavor with some subtle earthy tones. The roast is on the lighter end of the spectrum which is definitely our style, but the team at Founders also didn’t want an overwhelming amount of bitter/ashy character coming from the coffee, which happens all too often with coffee beers. They knocked it out of the park with pulling sweetness out of the coffee through their brewing process, it’s so great to work with a brewery that understands what specialty coffee has to offer.

JK: Well, obviously, it’s convenient using a supplier located in your same city, and we’ll always support a Michigan company–provided the quality and price meet our expectations. With Ferris, in addition to price and quality, it’s really been the personal relationship I’ve developed with Mark [Van Tongeren, of Ferris] and Sam that makes our partnership so important. These guys are passionate and creative and they’re coffee experts, so they’ve been invaluable in helping me select the right coffees for the right beers. Forgive me but 9% is not a meek coffee beer, and your KBS is up at like 11%. Does Founders have any other coffee beers in your lineup that are more sessionable?

JK: We did a 5.5% ABV golden ale with Ethiopian coffee called Pale Joe a couple years ago as a limited release that was really cool. And a few times a year we do our 4.5% ABV nitro oatmeal stout infused with hazelnut coffee, exclusively in our taproom.

Last question for both of you: what’s your personal favorite coffee beer of all time?

SM: Sumatra Mountain Brown is amazing, there have been times that I’ve considered it my favorite coffee beer in the world ever…However, I think Breakfast Stout still holds the title in my book. Part of the allure could be the fact that it comes out when it starts getting colder in Michigan and it’s such a damn good beer to drink when it’s snowing, but it’s also just everything you want in a coffee beer, big coffee nose, layers of chocolate, creamy mouthfeel, roasted malts, all that. Plus, there is a baby on the label, that’s just funny.

JK: They’re not necessarily my favorites, but the two that got me into coffee beers were Bell’s Java Stout and Redhook Double Black Stout. Classics! Ferris Coffee is an advertising partner on Sprudge Media Network.