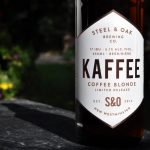 The natural paradise of mountains, plant life, and ocean shore makes the Pacific Northwest an undeniable source of inspiration. But for many, inspiration can be found elsewhere, and especially in a place such as Cascade Brewing Barrel House. Not long ago, Jorden Foss, co-owner of Steel & Oak Brewing Co. from New Westminster, BC, found himself in a situation familiar to many beer drinkers on the West Coast: He was drinking incredible beers at Cascade. However, it was just one beer in particular, and the distinct taste he encountered, that would inspire and lead the way for what Steel & Oak now calls Kaffee.

“When I had the Oblique Black and White Coffee Stout from Cascade, it was insane,” he says. “I had never seen anything like it before—a blonde-colored beer that could have such deep coffee notes,” says Foss. This beer inspired him to work with his head brewer in creating their first coffee beer and was the guiding light and point of reference for crafting the taste profile they sought. “The idea was to create a coffee beer that was lighter in roast and style so that we could prove that coffee beers don’t always have to be dark and rich.” Once they had the inspiration and the idea, they were still missing a pretty key ingredient: the coffee. Lucky for them, New West is just a stone’s throw from Vancouver and its multitude of coffee options to choose from. Foss was already a fan of the city’s Timbertrain Coffee Roasters, so it was a bonus that he had a friend actually working there. Having had previous experience creating coffee beer collaborations with Twin Sails Brewing and Russell Brewing Company, Timbertrain didn’t take long to jump on board as the admiration for Steel & Oak was mutual. “Steel & Oak really fit our brand and we appreciated the direction they wanted to take highlighting the coffee,” says Timbertrain co-owner Jeff Shin.

Although this specific beer doesn’t follow Steel & Oak’s typical MO of German-style brewing, that didn’t stop the brewer from naming the beer as such. “We do a lot of German beers here, and when we were trying to come up with something unique that had a ring to it, we literally went to Google and wrote, ‘translate coffee into German,’” says Foss. ”We loved the way it sounded so we rolled with it.” With a name and partner sorted, they began looking for the base beer to use. Knowing that they wanted to achieve a look and taste visually with a blonde style, their Royal City Ale was the ideal choice with its classic mix of pale malts and a body and mild bitterness that would work wonderfully with the coffee additive. The current iteration of Kaffee is actually the second release from the two companies. The first release used the same base beer, but with coffee from Ethiopia’s Yirgacheffe Beriti region. This beer had a strong floral aroma and notes of citrus fruit that played well with the blonde style of beer. When deciding on a way to brew the second release, the team looked to get a more classic coffee presence in the beer while still maintaining the citrus and other qualities that make a blonde coffee beer unique. The coffee chosen was again from Ethiopia, but this time from Sidama Guji, which had similar flavors as the Yirg, but also included notes of caramel, biscuit, and cocoa. “We chose a roast with a bit more development so the coffee came out with more punch in the brew,” says Shin. The combination delivered the delightful mix they were hoping to achieve. It is a beer that is bright and unique, while still providing the body and flavor of coffee. Immediately after pouring the Sidama Guji Kaffee, the nose is met with notes of sweet citrus from a stunning golden color that plays with the eye as you would expect a darker shade coming from the brown bottle. The first taste is light and sweet on the tongue with a mildly bitter finish of grapefruit. The malts complement the roasted coffee flavors nicely to create a smoother mouthfeel than a typical blonde ale. After allowing the beer to sit and slightly warm, the coffee notes really come forward. Caramel, brown sugar, and cocoa reveal themselves and round out a wonderful drink from start to finish.

Although this version of Kaffee is a limited release, both the roaster and the brewer have confirmed that they have every intention of producing a third installment. Now with two successful attempts under their belts, it will be exciting to see what combination of beans and brew these guys choose next.