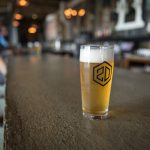 “We kinda skipped right over that,” says Aaron Ultimo (pictured above on the left), laughing, when I ask him about an actual coffee beer. We are sitting in the Ultimo Coffee lab, which takes up half of the second floor of a South Philly row building, on a block otherwise mostly populated with auto body shops. For someone who’s built his name and business on the unmitigated quality of coffee, Ultimo is remarkably frank about his ambivalence toward the entire concept of cascara—exactly what we’re here to talk about. “Personally? Not a huge cascara fan,” he says. “It’s interesting to me, but I’m not going to choose to drink it. That’s why I never went out of my way to offer it.” But the chance at a one-of-a-kind partnership can change everything, as was the case for Ultimo. The building that Ultimo calls home thrums with energy. Roasting operations certainly contribute to that, but there’s more. The other half of the floor is now home to Second District Brewing, a project of master brewer Ben Potts (pictured above, right). And on the ground floor, Second District’s brewpub plays daily host to multitudes who come to taste unique beers. There’s only an open doorway upstairs between Second District’s brew room and Ultimo’s roastery, so a free exchange of ideas is almost constantly in progress. “I forgot about it for a really long time,” says Potts, “but then one day, one of the Ultimo guys came over and was like, ‘try this.’” Handing Potts a cup of amber liquid was the beginning of Chiaroscuro—the Cascara Saison.

“It doesn’t taste like coffee at all,” Potts says, recalling the first time he tried cascara. “It reminded me of rose hips, or rooibos tea.” Incorporating tea into beer is nothing new for a veteran brewer such as Potts, whose absolutely stacked résumé includes experience at both Dogfish Head and Tired Hands. “A saison was the first thing that came to mind,” he says. “Saisons have a unique history of being brewed with whatever ingredients are on hand, since the advent of the style, so it seemed to fit thematically as well.” “I mean, it’s coffee: It’s a popular thing,” Ultimo says. Educating people about coffee cherry isn’t necessarily the goal, but he doesn’t see it as peripheral to the beer itself. There’s a very real buy-in on the part of people who are coming to Second District—there’s no small amount of trust that goes into trying a “not coffee” coffee beer. “It’s a lighter, quaffable beer, so I think it’s a great representation of who we are and who we want to be: out there and marching to a different drum,” he says.

Getting the cascara was the first challenge. “Initially, I came back empty-handed,” says Ultimo. “Then on a whim, I texted my buddy at Caravella, Brent Hall, and he said, ‘How much do you want?’ ” Hall was able to connect Ultimo to producer Alexander Vargas in Colombia, from Finca Piragua, who could source 100-percent Caturra coffee cherry. An 18-kilogram order was enough to get Ultimo and Potts started, split 50/50. Ultimo put Cascara back on the menu in his cafes and Potts took his share and went right for the beer. “I have a very gung-ho, just-go-for-it attitude when it comes to beer,” says Potts when I ask if he did much research before diving into the brewing process for Chiaroscuro. “With steeping tea, you can extract tannins if you steep too long or too hot, so I wanted to make sure there wasn’t anything like that—and there wasn’t! It just built a little more in acidity as the steep went on, which was nice and actually very fitting for the saison style.” Adding the coffee cherry after the boil and before knocking all of the sediment out of the kettle allowed the Cascara to extract in the beer for about an hour, plenty long enough to impart all of its sweet, malty herbaceousness.

In terms of reception, Potts says that Second District patrons appreciate Chiaroscuro’s unique place on the Second District tap list. “It maybe isn’t necessarily the fastest-selling beer. But it’s deserving and demanding of your attention.” Ultimo remarks that the complex flavors might not be what bar patrons are expecting: “There’s a sort of a green peppery sorta thing that sometimes I find in coffee cherry when I taste it. So I think it captures a little bit of that leathery fruitiness that is also present.” As Chiaroscuro nears the end of its tenure at the Second District brewpub, Potts and Ultimo are beginning to chart the next steps for their budding partnership as symbiotic cohabitants. For his part, Potts looks forward to potentially working with cascara again, but in a wildly different way: “I really want to do a Berliner Weisse with cascara and ginger and cinnamon, based on the drink that’s very popular in Yemen and Ethiopia [qishr].” Ultimo has less specific ideations, preferring instead to leave it up to the ingenuity of the brewmaster. He muses simply, “We’ve got the coffee.”