Coffee At The Movies: It 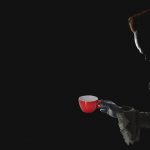 As far as I’m concerned, Los Angeles has only two things: great coffee shops and the ArcLight Cinemas Cinerama Dome. The latter is an enduring relic of a moviegoing culture that has demanded bigger and more immersive moviegoing experiences to stave off the threat of home entertainment’s dominance, which has been chipping away at film attendance since its peak in the 1940s. The former is a recent beverage revolution with design, spacial awareness, and general execution that makes this coffee competitive New Yorker hungry enough to crush these sunny west coasters who are increasingly killing it.

These two Californian wonders should be enjoyed together, in the spirit of excess. And so yesterday, during a brief visit to LA, I snuck a delicious coffee into the ArcLight in Hollywood to bear witness to that terrifying savior of the lagging American film box office, the big screen adaptation of Stephen King’s It.

Go Get Em Tiger‘s Los Feliz outpost is just a few miles away from the historic theater, on a quietly trendy block of Hollywood Boulevard set beneath the Griffith Observatory (and Angelina Jolie’s house). Delicious coffee and food and genuinely warm service is enough to make New Yorker suspicious about why everyone seems so happy. I’m not much for alternative nut milks, but it’s kind of a thing here, and these Angelenos live differently than I do, plunging daily into the murky depths of non-dairy milk preparation with the bravery of children battling psychotic clowns. Wanting to be as fearless as these intrepid nut-milkers, I ordered an almond macadamia milk iced cortado from barista Brent Glanville, who kindly didn’t scoff at my off menu order.

I really need a travel mug sponsor for these acts of coffee deception [Ed. note: we are actively seeking a travel cup sponsor for Coffee At The Movies] but for now, one of my companions was kind enough to stash my sweaty plastic cup in her purse. Together we snuck it past a kind usher; they probably wouldn’t have cared if I strolled in proudly slurping my lovely and refreshing nut milk concoction. As the Dome’s enormous curved screen prepared to test me for coulrophobia, with a fellow diehard horror fan on one side and two scaredy cats on the other, I was ready to be scarred for life.

A seemingly endless two hours and change later, I was still waiting for those scars. Andy Muschietti’s sometimes stylish but mostly loud film is a collection of greatest hits from roughly half of Stephen King’s mammoth novel about a kid-killing entity that primarily takes the form of a circus clown. While King’s chunky tome is an absorbing non-linear deep dive into New England sewer terror, this flick is a straightforward chronological account of children getting the hell scared out of them. (A sequel about their clown-battling adult years is forthcoming.) I found the film’s cast of rag-tag nerds to be sometimes endearing, yet sometimes lost amidst a cascade of dissonant violin cues insisting to us that we should be scared.

Like most King adaptations, It generally suffers from its writers’ and director’s creatively sloppy adjustments to the source material. The kiddie action is moved up from 1958 in the novel to 1988, perhaps as a cynical attempt to capitalize on film and television’s recent 80s fever. If It feels like it’s drawn from the same palette as “Stranger Things,” that’s not by accident—they literally cast one of the “Things” kids for It’s “Loser’s Club“—but the film’s attention to period detail is mostly crummy and there’s no synth in the soundtrack, which is totally unforgivable.

Worst of all, the film’s intended showstopper, Pennywise the Dancing Clown (Bill Skarsgård), is a huge disappointment. The antique clown getup begs you to be scared while Skarsgård does an act that lands more like sketch comedy about a scary clown. Tilda Swinton was considered for the role and that would likely have had me sweating, covering my eyes, and clutching my cold nut milk in horror. Skarsgård just makes me long for Tim Curry.

The post Coffee At The Movies: It appeared first on Sprudge.