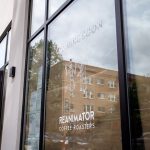 What’s the statute of limitations for bursting into a modified, coffee-centric version of a famous television theme song? Do such limitations even exist if the song is catchy enough? These aren’t the sort of questions you expect to be asking yourself when reading a Build-Outs of Summer article, but it’s been 27 years since The Fresh Prince of Bel-Air first aired and ReAnimator Coffee Roasters is opening a new cafe in West Philadelphia, so here we are.

This will be the coffee roaster’s third namesake cafe, and a lot has changed in West Philly in the past 27 years, if the rest of The Fresh Prince theme song is to be believed, which I do. And ReAnimator is changing too, from their recently rebranded packaging to their ever-evolving approach to coffee to this new cafe, which will be a combination of the coffee service at their two other cafes and the culinary aspects of Res Ipsa, the Italian eatery for which they are part owners. There’s a lot of new life in ReAnimator and in Philly. No need for any nearly three-decade-old references. As told to Sprudge by Mark Corpus.

For those who aren’t familiar, will you tell us about your company?

We are a roaster in Philadelphia and we have two retail cafes (soon to be three) and we are part owners and run the coffee program of the award-winning Res Ipsa Cafe, an all-day cafe and Italian BYO. We have been roasting in Philadelphia since 2011 and have watched the coffee and culinary scene develop over the past few years, and we are excited to be a company that is at the front of that movement. There is a lot of cool stuff to come in Philly.

Can you tell us a bit about the new space?

Our third location is in West Philadelphia, which is a very culturally and socioeconomically diverse neighborhood. It is a melting pot of college students, punk collectives, and large Ethiopian and Middle Eastern communities as well. It’s really quite beautiful there with a lot of large old homes with wide porches, lush tree-lined streets, and just the general feel that you’re not in a major city. It is a relaxing part of town. Our location at 4701 Pine St is next to the lobby of the Garden Court Plaza, which is a massive historic Art Deco building. The building was in disrepair for many years, but the new owners have done a great job of uncovering and preserving a lot of the Art Deco details as well as tying in modern elements. We are taking our cues from the Art Deco bones of the building and trying to add small details that will blend with the overall feeling of the building. Our style has always been understated and non-ornamental so adding Art Deco elements to the design has been a fun challenge. What’s your approach to coffee?

Our approach has shifted a lot in the last year or so, as we’ve focused on becoming as seasonal as possible, and rotating our single-origin lots multiple times through the season. We try to never serve any particular single-origin coffee for more than four to six weeks, allowing us to keep our menu highly reflective of the season, while also keeping our customers and wholesale partners engaged and excited. It’s required a lot of adaptation and focus in our roasting and profiling, since we’re now developing and executing new coffee profiles at a much faster rate than most roasters. Now that we’ve dialed this process in a bit, we’re feeling great about the strategy. And the feedback from our customers has been great. It’s always fun to have something new to discuss and taste.

We will have a Synesso two-group MVP, a FETCO batch brewer with an Mahlkönig EK43 as well as a kitchen area where we will be preparing simple foods…this is a new development for us and should be pretty cool. We are shooting for end of October to early November.

Are you working with craftspeople, architects, and/or creatives that you’d like to mention?

Our longtime design and building partner, Paul Maiello, is working on custom benches, shelving, and bar fronts that will have tasteful Art Deco elements. He is also building a very beautiful center bar out of a single slab of black walnut. The Build-Outs Of Summer is an annual series on Sprudge. Live the thrill of the build all summer long in our Build-Outs feature hub. Got a Build-Out of your own? Get in touch.