Brooklyn’s Little Roy Coffee: The Little Cafe Across The Park 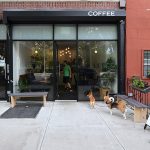 There’s a small, rambling dog-run at Bed-Stuy’s Herbert Von King Park, but few dogs know of it—unless they live off the G train. Little Roy Coffee Co. opened recently across from this park, and the owners, borrowing the name from their late Pomeranian, Roy, want to give unknowing folks more reason to visit the park, one of the oldest in Brooklyn.

“It’s such a friendly, great place that it’s just nice to have a space here to participate,” explained Jannah Greenblatt, who opened Little Roy with her husband, Moe Gabr, after having lived in Bed-Stuy nearly a full decade. While it has less green space than fellow neighborhoods, it’s also where brownstones and block parties reign. The thrumming neighborhood swelled with restaurants and bars over the past decade, but the streets surrounding Herbert Von King Park remained mostly residential—until Little Roy opened its doors. Greenblatt and Gabr opened Little Roy in order to extend this experience—to offer space for the community to linger, and to enjoy the park—perhaps in a more caffeinated manner.

“We designed the space to connect to the park and atmosphere,” explains Gabr. “The standard approach would have a bigger operations side, which means you have the bar on one side of the interior,” explains Gabr. “But you would really diminish the space for a seating area, and for people to enjoy the park—so our focus was to really give the people the space.” Gabr has made the most out of 500 square feet. The glass storefront opens into a stylish seating area; its walnut banquette seats plenty along one side, and a handful of tables with black Windsor-style chairs seat more on the other. A cosmic, brass light fixture of interconnecting globes adds contemporary spirit to the already sunlit interiors, and white, geometric wainscoting stretches across the walls and counter to give the cafe its subtle, Brooklyn edge (can you guess that he owns an interior design boutique?).

It’s crisp and minimal, so as not to distract from the bigger picture: the parkside view.

Perfect for a hot Brooklyn summer, Little Roy is pouring necessary cold brews, which they’re making with Caffé Vita’s chocolatey Theo Blend. For espresso, drinks are made with selections from Counter Culture Coffee. “We’re planning other refreshing non-caffeinated drinks that have an Egyptian, or Middle-Eastern influence, sort of melding it with something that’s accessible or interesting to people here,” says Jannah, paying homage to Moe’s Egyptian roots.

On the menu now, Moe’s Helba Latte is a popular curiosity. Traditionally served with warm milk, Moe crafts his own version in latte form with fenugreek, ginger, turmeric, and honey. In coming months, they plan to add items like iced licorice tea—it’s dark, naturally sweet, and popular in Egypt. Pastries by local bakers, like Ovenly and Bed-Stuy’s Saraghina, line the counter with croissants and slices of pistachio-cardamom loaves. On the menu, Moe’s heritage embellishes classic cafe fare; an essential avocado toast is front and center, while fig and goat cheese toast gets a sprinkle of za’atar. The house-made hummus was one of the first dishes to land, while an egg-in-a-hole recently made an appearance, along with a grilled cheese that’s brightened with preserved lemon and oregano.

And there’s one appearance you can all but guarantee: You’ll spot the neighborhood’s best friends, from terriers to retrievers, awaiting their owners alongside the cafe’s outdoor benches—here, the water bowl is always on the house.

The post Brooklyn’s Little Roy Coffee: The Little Cafe Across The Park appeared first on Sprudge.