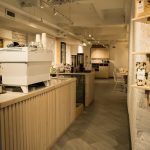 In a sleepy little corner of Manhattan’s Financial District is a small stretch with only three or four businesses—a Dunkin Donuts, a sandwich shop, and as of late summer, a specialty coffee spot known as Boundless Plains Espresso. And no, this cafe isn’t trying to knock out its neighbors with better artisanal sandwiches and donuts. It’s just trying to brighten things up.

“There’s actually a permit that says we can’t serve donuts here since we’re next door to them,” laughs co-owner Michael Vona as we joke about the shop, who moved from Melbourne, Australia to open Boundless Plains with his friend Jo Black, a former attorney who has since traded in the legal briefs for a portafilter.

The Australian-inspired cafe keeps a focus on service and meticulous coffee prep, but above all, seems intent on carving out a space of lightness in the cavernous Financial District. While much of New York’s cafe scene seems to thrive off of dim, romantic lighting, this cafe is the total opposite: it glows with rows of indoor spotlights and roped lighting that lines the backs of the benches. Marble countertops, white-tiled ceilings, and walls encourage light to bounce around the room, creating a radiating space that heavily contrasts the world immediately outside. While the Financial District primarily exists as a destination for tourists and businessmen, this small space is aimed at taking a neighborhood approach. Whether you’re a tourist or not, Vona and Black will be sure to ask your name and where you’re from before getting your drink. They want to get to know every single customer that walks through their doors—which has been surprisingly easy thanks to the area’s condo boom, slowly filling up the morning lines with regulars who are actual residents, not just day-jobbers.

It’s easy to build a cafe that’s based on relationships when the owners started out as cafe friends themselves. Prior to opening Boundless Plains, Vona was part of a family operation in Melbourne called Cento Mani, a coffee joint with homemade pasta. Here, Black and Vona crossed paths and quickly became friends beyond the bar. When Cento Mani switched ownership, Vona later moved to New York to assist in Black’s efforts to create a similar small coffee shop that mirrored her previous Melbourne experiences. Treats like chia pudding, granola parfaits, and açai keep mornings fresh and healthy, but avocado toast with Australian goat feta and tomato toast pack a heartier start for the day. While the menu will remain small, it’ll likely keep changing based on customer feedback and season.

“At first I had a great [$12] falafel on the menu, but people were like, ‘You could find that for three dollars on the sidewalk in New York!’” Black exclaims. While the inspiration here may be Australian, Boundless Plains keeps everything else local, with the city’s Parlor Coffee Roasters, employing their citrusy full-bodied Prospect Blend for espresso. They maintain quality control with a Mahlkönig EK43, Curtis brewers, and a La Marzocco Linea PB with integrated scales. Like the food menu, the coffee menu is equally straightforward, with nothing more than standard milk espresso beverages, drip coffee, and for fun, a chai and a matcha latte. Teas hail from Greenpoint’s Bellocq, and pastries are provided by nearby Black Fox Coffee, whose chef Allison Fox also helped Vona and Black create the food menu.

Inside Boundless Plains’ brightly lit space, talking to Vona and Black, one thing is clear: the owners’ sunny optimism definitely radiates beyond the shop’s unassuming doors.

All photos by Katrina Yentch unless otherwise noted.