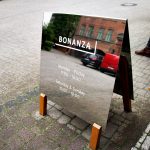 Bonanza Coffee Roasters is well-known in Berlin. Pioneers in the city’s third wave coffee community, Yumi Choi and Kiduk Reus opened the original location in Prenzlauer Berg in 2006. As one of the only shops in the area then serving specialty, light-roast coffee, they quickly became a destination. And Bonanza has expanded, with a second cafe opened in Kreuzberg last year.

The new Bonanza lies a bit off the beaten path. Situated on Adalbertstraße, next to a petting zoo, it’s easy to miss. But for the intrepid, or in-the-know, a short jaunt through an alley rewards you with one of the slickest new coffee spaces in Berlin. The cafe lies inside a brick factory building, complete with a courtyard and airy indoor seating. Unlike their first shop, the Kreuzberg cafe is equipped with a Probat roaster on site, where big glass windows give visitors an inside look into Bonanza’s roasting process. Choi says that the design of the cafe is a result of collaboration with Marick Baars’s Modiste Furniture, also responsible for the redesign of Bonanza’s packaging.

“We wanted him to create something transparent, light, open, ingenious, and minimalistic,” Choi says of Baars. “Something that would reflect our approach to coffee and at the same time be harmonious with the building, which is a protected monument.” Kreuzberg isn’t what it used to be. The former West Berlin home to immigrants, artists, and squatters is quickly giving way to upscale boutiques and bitcoins—it has the world’s highest density of businesses who accept the digital currency. Still, while change is in the air, the neighborhood formerly ensconced on three sides by the Berlin Wall is still here if you look for it.

“I love the Oderberger Straße [in Prenzlauer Berg],” Choi says. “It’s one of the most beautiful, most historic, and one of the best culinary streets in Berlin, but we wanted to go where you could still feel the rawness of Berlin. I am a Berliner, and lived many years in Kreuzberg and Neukölln—I feel connected to this part of Berlin. For us as a company it was very important to move where things are maybe a little bit more difficult and contrasting, where cultures and scenes clash. It’s an environment where new things emerge.” The cafe itself is a true coffee-lovers destination. It’s raw, with no frills save maybe some of the menu’s non-coffee options like homemade cascara soda, hot chocolate, fair trade tea, and for summer months, a frappe. If you’re lucky, you might even get a pastry.

“We offer artisanal pastries from the best French pastry chef in town,” Choi says. “It is a super small production—it took us 10 years to convince him to sell his croissants to us.” They are so limited that you can only find them at Bonanza a few days of the week. Like its Prenzlauer Berg location, Bonanza Kreuzberg has a devout following, who acknowledge you really can’t go wrong with a Berlin classic. “We find it inspiring to be part of the Kreuzberg fabric,” Choi says. And indeed, only a year since opening, it already seems as though they’re stitched in for the long haul.