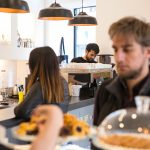 The wifi password at Faro – Luminari del Caffè in Rome is senzazucchero, or, in English, “sugarless.” Despite being a seemingly minor detail, it’s meant to tease Italians for their habit of drinking strong ristrettos, usually made on an old lever machine, full of sugar in order to balance the bitterness. But Dario Fociani, who founded Faro along with two partners, Arturo Felicetta and Dafne Spadavecchia, says that they don’t want to break the sweet tradition. After all, it’s as Italian as an Alfa Romeo. “Our challenge is simply sharing what we love to do and applying a scientific approach to the brewing of good coffee,” says Fociani, who’s had a long-term international career as a barista, starting in Melbourne and doing stints in several European specialty cafes such as The Barn in Berlin and All Press Espresso UK and Exmouth Coffee in London. His business partner, Felicetta, has years of experience as a bartender, and Spadavecchia is responsible for the communication strategy and the administration of the cafe’s day-to-day operations. They opened last December in a space with a large shared table that does nothing to remind one of the old cafes of Via Veneto, the fancy Avenue portrayed in Italian films like La Dolce Vita in which the story revolves around a decadent Roman society at the end of the ‘50s. Faro is a little bit far from the main buzzing spots in town, but it is still in a central location and is in the natural path of pedestrians. “We loved this area. It’s not as vibrant as other streets but it has a good balance among tourists, residents, and workers since it’s surrounded by many offices. Besides that, we are open on the weekends, where everything else is closed and this has made us a reference point for many people,” says Fociani. When I visited, down-to-earth customers and baristas greeted one another like old friends, with whole families—kids included—coming for breakfast. On that bright summer Sunday at Faro, I tried two brewed coffees—one from Ethiopia roasted by Gardelli Specialty Coffees and another from Brazil by The Barn—and a sweet, acidic espresso from Fazenda Agua Limpa in Minas Gerais, Brazil, which was roasted with a profile only served during weekends. During the week, Fociani tries to adjust the espressos to something as close as possible to Italian tastes. He said that Gardelli has created a blend called Cigno Bianco that ties specialty coffee and the classic Italian tradition of stronger, fuller-bodied, and more bitter drinks. It is composed of the harvests from two farms, one Brazilian and another Panamanian, in an attempt to offer a sort of passport to the specialty coffee world. To accompany this Roman experience, Faro offers a range of sourdough bread, cakes, and pies that remind customers over and over that they’re in Italy. Third wave coffee in Italy is in its infancy, and while most consumers and the media still ignore it, the work of Fociani and others to bring the country fully into the specialty scene is getting attention. An Italian collective media project called Romedia Studio recently released an online documentary, Coffees : Italians Do It Better(?), introducing audiences to the specialty coffee world. And Faro is already buzzing with ideas to take its next step forward, which could include roasting. For now, though, the cafe is focused on the present, working hard to become a reference point for high-quality coffee in the heart of the eternal city.