Behold! The Science Behind The Floating Creamer Drop 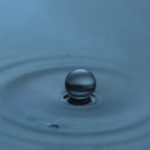 As reported by Vox, this mesmerizing dance between hot coffee and cold cream is made possible by the difference in temperature between the two liquids. Up until the publication of the MIT scientists’ findings in the Journal of Fluid Mechanics, a explanation for this phenomenon was a mystery. A jiggly, hypnotic mystery.

The scientists discovered that the bouncing baby bubble stays afloat because a tiny amount of air separates the cream drop from the surface of the coffee. Were the two liquids similar in temperature, it would only take milliseconds for air to be pushed out, causing the cream to fall into the coffee.

The researchers say these findings and the models built to explain it could have further applications, none of which I can honestly say I understand in the slightest. Something about “labs on chips” and “chemicals [running] diagnostic medical tests].” It all sounds cool but don’t ask me to explain it.

In the meantime, enjoy a little droplet of creamer dancing on your morning coffee and your newfound ability to impress friends and strangers alike by explaining, “you know that’s caused by vortexes.”

*all media via MIT News

The post Behold! The Science Behind The Floating Creamer Drop appeared first on Sprudge.