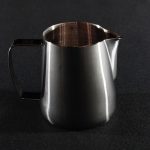 I’m bad at latte art. Like, real bad. On a good day I can maybe get a blurry piece of wheat or a bloaty heart with a weird tail. But apparently I’m not entirely to blame for these foibles; milk pitchers often lack the symmetry to pour champion-level art. That’s the thesis behind Barista Hustle’s just announced Precision Milk Pitcher: axial symmetry for exacting latte art.

So how is this pitcher different from other milk pitchers, ones that generally in price between $8.95 and $16.30? According to the announcement video, most milk pitchers’ handles aren’t aligned with the spout. You want your handle to run parallel with your spout and to be exactly 180° from the spout radially. Most are all catawampus, lilting hither and yon, and it is affecting the symmetry of your pours.

Other features include a versatile spout, narrow enough for high detail pours but wide enough for the perfect slowsetta. The team behind the PMP have opted for a laser-welded flush handle, which doesn’t leave crevices for milk to cozy up into and won’t break. Barista Hustle is so confident in the handle—the weld is stronger than the pitcher itself, according to the video—that they are offering a lifetime guarantee and will replace it for free should it ever break.

The Precision Milk Pitcher is currently on pre-order for $49 with an expected shipping date sometime in November of this year. Barista Hustle is currently offering free shipping worldwide for all pre-orders. For more information or to pre-order you own, visit Barista Hustle’s official website. Then you’ll have nothing to blame but your own shaky hand for you crappy latte art. I also blame your shaky hand for my crappy latte art. Tough break.

*all media via Barista Hustle