Back To The Beginning With Blue Bottle’s Old Oakland Cafe 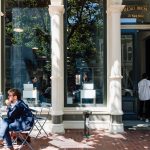 Fifteen years ago, Blue Bottle founder James Freeman sold his first bag of coffee at the Old Oakland Farmer’s Market at Broadway and 9th. Freeman at the time was roasting his beans in a 183-square-foot potting shed and delivering them to his friends in a beat-down Peugeot wagon. Old Oakland was the first market in the Bay Area that would accept Freeman’s nascent roaster as a vendor. In July of 2017, a decade and a half later, Blue Bottle is the biggest name in specialty coffee with shops in America and Japan, a thriving delivery service, and a line of coffee gear fine tuned to the company’s extremely high standards. But getting bigger doesn’t mean you still can’t come home. This summer sees Blue Bottle’s return to Old Oakland, across the street from the Old Oakland Farmer’s Market. It’s a return to the beginning, a back to where Blue Bottle first got its start.

The new location, the Bay Area’s 13th brick-and-mortar locale, sits on the ground floor of The Henry House. Built in 1877 by banker Ashmun C. Henry, The Henry House was a “first-class hotel” that was once the stomping grounds of famed, and troubled, dance sensation Isadora Duncan. “I like to imagine that my office in the building,” James Freeman says, “is where she stayed. But I don’t actually know that.” Working with architectural firm Bohlin Cywinski Jackson, Freeman hoped to instill the space with a hint of a recent interest of his: turn-of-the-century perfume factories. “I’ve been fascinated by the perfume industry,” he says, “it’s so clinical and scientific, but it’s all in the service of pleasure.” The exterior of The Henry House boasts an impressive Italianate facade—Corinthian columns and the occasional gleam of gold leaf. Inside, Bohlin Cywinski Jackson has, in the Blue Bottle tradition, worked with the materials on offer. In this, original brick walls and an exposed ceiling pair with Baltic birch cabinetry and the requisite shine of a burnished La Marzocco espresso machine and a pour-over drip bar.

Customers at the new space will have the opportunity to peer into the training process of Blue Bottle employees. The company’s state-of-the-art training facility stands exposed behind a floor-to-ceiling window, the next generation of baristas learning their trade a few hundred feet from where Freeman got his start in the coffee business. “We didn’t need to make a cafe that was twice the size,” Freeman says, “and we liked that Old Oakland would be a hub of activity.” Already, baristas from the recently opened Blue Bottle in Georgetown in D.C. have made the trek to learn the Blue Bottle way. There’s been talk of a 15-year anniversary, though Freeman has always been skeptical of celebrating past successes. “I like to keep looking forward,” he says, “but maybe we’ll roast a special coffee, sell it on the corner.” In the meantime, Blue Bottle will, inevitably, continue to grow. “Given how successful we’ve been in Japan,” Freeman says, “there’s definitely other countries in Asia that are calling out to us.”

Noah Sanders (@sandersnoah) is a Sprudge.com staff writer based in San Francisco, and a contributor to SF Weekly, Side One Track One, and The Bold Italic. Read more Noah Sanders on Sprudge.

The post Back To The Beginning With Blue Bottle’s Old Oakland Cafe appeared first on Sprudge.