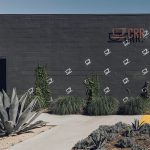 Ed Moffatt is an import. An Aussie, from Melbourne, living in Orange County, California. He owns Common Room Roasters in Newport Beach, which sits about 600 meters inland from the ocean. He and Common Room’s co-owner Jeremy Creighton met in South Yarra, while Creighton’s ad agency, Passport, was on the same street as Moffatt’s first cafe. Now, a hemisphere away, Passport’s second office is in the same building as Common Room.

Creighton moved to America first, while Moffatt was still in Melbourne, working as Locale’s head roaster while owning and running Long Island Brew Bar. At Locale, Moffatt worked under Christiano Portis but had been a part of the Melbourne coffee community since the early aughts. He was established, settled with a wife and kid and house. And then Creighton called.

Apparently, there was no coffee in America. Or at least, there wasn’t any coffee good enough and close enough by, by Melbourne standards, for Passport’s Aussie-majority staff to get any work done. “So over Skype,” Moffatt says, “I’m like, buy this machine, buy this grinder, buy these Acme cups. I didn’t say get a Strada,” Moffatt admits. “I said get a [La Marzocco] Linea.”

The setup would become The Common Room, a rolling cart for Passport’s in-house use that, every Friday, Creighton would wheel out for the public. Between 9am and 11am, Passport’s neighbors—it’s located in an industrial zone whose occupants include businesses like Salt, RVCA, Hurley, and Vans—could come by for free flat whites and shots of espresso. It didn’t take long for them to start knocking on Creighton’s window every morning, asking if The Common Room was open today?

“So now Jeremy’s like, ‘move to America,’” Moffatt says. “And I’m like, ‘Okay.’” It only takes 12 weeks, and in early 2016, Moffatt makes landfall—waiting for him is Creighton, a warehouse, and a Joper roaster. The Common Room closes, and Common Room Roasters is born. “We basically didn’t have any wholesale customers,” Moffatt says of the first few months. “We were just roasting for ourselves, getting our green supply figured out, and taking time to settle the roaster.”

Patch Coffee bought from Common Room in the early days, but it was difficult to attract attention. The cafe—charming as it was—had become a distraction from the company’s wholesaling goals.

So, early in its life, Common Room went through a redesign. “Because we had to stop and start, we got the chance to redefine our goals,” Moffatt says. “Before, we were another coffee shop full of computers. And we were like, ‘hang on, we’re from Melbourne, we’re a roastery.’ We want this to be an interactive, useful space for people who are into coffee. Now, we’re an operating plant where you can buy coffee.”

Moffatt explains that as soon as the switch was flipped, people took notice. Both in Southern California and around the country, cafe owners and restaurateurs, including recent cool kids Gjelina and Gjusta, started ringing him up—the Melbournian roaster living in America. “All the Aussies around here—there are a lot because of the surf industry—come in and it’s awesome because I get to transport them all back home, one by one with a flat white and an accent,” Moffatt says.

The bigger picture for Common Room is not to simply act as a place to buy Melbourne coffee, though, but to help America usher in a specialty coffee wave the size and strength of which hit Melbourne 15 years ago. Of course, America already has specialty coffee shops—as Sprudge readers know, a lot of specialty coffee shops—but what Moffatt imagines is a movement wherein specialty completely displaces chain coffee, much in the same way it forced Starbucks to shutter the majority of its stores in Australia over the past decade.

“We’re all of us together against the big boys,” Moffatt says of chain coffee. “In Australia, our coffee is so good, why would we want that rubbish? We want to be better for our consumers. We want people to think that our level is the norm.”