At Last There Is Coffee For Dogs 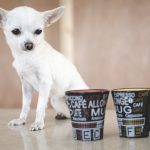 I love my dogs, all three of them—four if you count my 11-month-old daughter who exhibits some startling pack behavior. Sometimes I wish I could share my love of coffee with them; just a man and his best friends sharing a big ole dish of joe. It would be great. But it would probably kill them, so I can’t.

But it seems that at least one other person in this world expresses a similar sentiment. That one person is Agota Jakutyte, the creator of Rooffee (ugh), coffee for dogs.

Now, before we go any further, that name is terrible. As Motherboard points out, it is uhhhhh shockingly similar to “roofie”, the colloquial name for rohypnol, also known as the date-rape drug. It is pretty much the worst possible name. Why not just rely on the shared “aw” sound and go with Dogfee? It’s better than Rooffee. Jakutyte tell Motherboard that the name is a combination of “ROOTS + COFFEE” and that any aural resemblance to “roofie” is pure coincidence, which of course it is because who would intentionally name their product after the date-rape drug?

In fact, from here out, I’m going to do them a favor and refer to it as Dogfee.

Dogfee, the coffee for dogs, actually contains no coffee, because again, coffee is bad for dogs. What it contains instead is “a bunch of herbs and vegetables like dandelion root, hawthorn, chicory, burdock, and carrots” and is “intended to be drank by both pets and their humans.” But Dogfee is intended to be made like coffee, kind of. A rather bizarre video from their Kickstarter campaign shows the brew being made using a French press with coconut oil. So it’s really more like bulletproof dogfee.

This is not Jakutyte’s first interspecies product line; she is also the owner of Shoo, the maker of natural shampoos for dogs and humans alike. Shoo also sells logs from hazelnut trees for $10, but I’m not sure those are for humans.

Anyway, Dogfee is also supposed to help with weight loss, if that’s something you or your dog would be interested in. Jakutyte tells Motherboard it makes dogs “less hungry and less food obsessed.” It presumably is the same for humans? I dunno.

Have you ever thought you wanted something and then once you got it, you realized you never wanted it at all? That’s been my 400-word journey with Dogfee. I think my pups and I will continue to share apple slices and peanut butter. But maybe you still want to share a cup with your chubby Chow Chow. If so, grab some Dogfee.

And for those worried about a “Rooffee” showing up on their billing statement, don’t worry, Jakutyte has already said they will be changing the name. Might I suggest Dogfee?

The post At Last There Is Coffee For Dogs appeared first on Sprudge.