A Lovely Feeling Of Community At Barrio Collective Coffee In Canberra 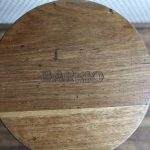 I’ve never lived in Canberra, but many people I love have, which means that I’ve spent an inordinate amount of time in the nation’s capital over the past decade or so. During that time, my concept of what “good coffee” is has changed immeasurably. When I was 14, it meant putting chocolate on top of my cappuccino and stirred the sugar in before adding the milk. Now, at 28, it seems to mean good filter coffee options with nuanced layers of sourcing, roasting, service, and care. With this progression of coffee preferences, there have been points where Canberra both met and failed expectations. And having not visited the city in a couple of years, it was with trepidation that I set out on a journey to investigate further.

Happily, with the first coffee stop of my trip being the lovely Barrio Collective Coffee, my expectations were met, exceeded, and essentially embraced in a warm hug. Opened in June 2015, Barrio came about by way of its three owners: Sam Burns, Duncan Turner, and Dan Zivkovich. Burns heads up all things caffeinated and brown, looking after green selection, coffee roasting, and coffee brewing; Zivkovich looks after food, the sourcing of ingredients, and also does the majority of cooking day-to-day; while Turner rounds out the trio, being across coffee and food, also looking after the business and strategy side of Barrio.

Upon walking into the relatively compact space on a bustling Saturday morning, you’re met with what used to be a bare concrete box, populated and warmed by a stunning reclaimed wood fit-out, an incredibly efficient small kitchen, a neat coffee set-up, and a takeout pantry selection that few could rival. Brand design was undertaken in collaboration with artist Andy Mullens, while the many beautiful reclaimed wood furnishings were built by Gordon Smith (benches and blue gum communal table), Tom Skeehan (the branded timber stools), James Young (joinery), plus some bits and pieces done by Thor’s Hammer, and then the shelving done by the Barrio team themselves. Turner explains that their initial goal with the space was to showcase well-sourced coffee in all its beauty in an environment that felt welcoming and relaxed. “Coffee started as the focus and well-sourced, seasonal, delicious food felt like a natural progression,” he says. “We really wanted to create a space that felt accessible to everyone and anyone.”

It’s a high-quality and inclusive goal that rings true, with the coffee offering ranging from a simple pour-over brew to one of the most delicious nut-milk coffees I’ve ever had in my life (maybe even better than G&B in Los Angeles—controversial, I know). Barrio roasts all their own coffee themselves, with green coffee being sourced from the (now-defunct) Silo, Cafe Imports, Caravela, and the Canberra-based Project Origin. Burns says that Barrio decided on roasting their own coffee from the very beginning. “We were quite specific on what we wanted to do with coffee [presenting only singles, versatility between filter and espresso, suitability with unhomogenized milk] so it was important to us to have that level of involvement with the product,” he says. “Control is a strong word, but I guess it is control over the steps involved with presenting coffee that has been so important to us.”

While the coffee alone is definitely reason enough to make the trip to Braddon and visit Barrio, the food offering is nothing less than stellar. Focusing on fresh local and regional produce, on any given day you could have rye-cured tuna with parsnip rosti, kale, and manchego, a corn tortilla with romesco, egg, wild mushroom and Sichuan salt, or even just a classic avocado on toast (dark rye bread, that is, with optional togarashi on top). At Barrio, there’s a lovely feeling of community—both between the staff and the customers and the coffee community as a whole. Over the past few years, Canberra as a city has thoroughly earned its place on the global specialty coffee map, and places like this play a huge part in that increased exposure.

It’s something that Burns summarizes best himself, and it’s a sentiment that touches on many of the reasons why coffee is such a lovely industry to be a part of: “Coffee shops have that ability to sit as a reflection of their community and as a resource for everyone to feel connected,” he says. “It goes beyond a shop selling something, it’s a reciprocal community building and this offers so much strength to the culture of a city. That’s been beautiful to see, that communities have grown around certain coffee shops and how it’s lifted the connectedness of the whole city.”

The post A Lovely Feeling Of Community At Barrio Collective Coffee In Canberra appeared first on Sprudge.