A City Of Love And Hate: Latin Culture Rising In The Phoenix Coffee Scene 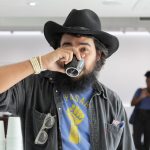 This was going to be a very different article.

The political environment in Phoenix is a paradox. This is a city with a thriving arts, culture, food, and beverage scene, a vast hub in the middle of the Sonoran Desert with a major focus on community and supporting local, creating an active environment of creative entrepreneurship and small business culture. But anti-immigrant ideals and bigotry remain an undercurrent here. It feels like these dark sentiments have been on a steady boil since November of 2016, emboldened by the election of a President who advocates building a wall across the Arizona-Mexico border.

A city that has become a flashpoint for anti-immigrant sentiment is also home to a truly thriving immigrant small business community. The city’s coffee scene is a window into that world: the good and the bad, the challenges and opportunities, and ultimately, a hope for wider acceptance and tolerance. That’s Phoenix—and Phoenix coffee. As the national specialty coffee industry experiences a widespread awakening towards equality and human rights within it—a direct result of the wider social and political climate here in 2017 America—little can be done to try and ignore how closely intertwined culture, politics, and coffee actually are. This concept is nothing new to marginalized coffee professionals, and this summer we saw it all in Phoenix. The usually quiet nature of political expression seemingly burst as news broke of Arpaio’s pardoning just three days after protests filled our downtown outside of Trump’s rally. It was a direct hit to the Latinx community, including many of those in the city’s coffee scene.

“I was actually pretty shocked by how upset I was,” Ash Ponders tells me. Ponders is a fixture in the Arizona coffee community, recognizable as a highly-knowledgeable enthusiast and regular at the city’s good coffee bars. He’s Panamanian-American, and his photojournalistic work has been featured in Phoenix New Times, La Prensa in Panama, Village Voice, and Standart Magazine. “I’m generally cynical, still hoping for the best but expecting the worst, but this ticked me off.”

Joe Arpaio is infamous for terrorizing Arizona’s Latinx community. Self-dubbed the “toughest sheriff in America”, his policies on immigration resulted in the unconstitutional and illegal profiling of minorities in Arizona. The inhuman conditions of his jails—most notably Tent City, an open-air prison in which inmates were forced to live outside in triple-digit temperatures—are a sad smear on the conscience of all Arizonans, and have kept Sheriff Joe under a constant veil of controversy statewide. Jorge Torres—the owner and head stylist at Palabra, a collective hair salon, art gallery, and home of popular 49th Parallel account Futuro Coffee—attended the Trump protests in August, and calls the Arpaio pardon “a stab in the gut.” Palabra (Spanish for word) began as a downtown Phoenix salon and gallery concept in December of 2012, before moving to a new location and expanding to serve coffee in January of 2016. Torres celebrates minority and immigrant artists and creatives in his space, and his own Mexican-American heritage is apparent in the all-Spanish coffee menu that features beverages like jamaica (a Hibiscus tea), cajeta (a latte with homemade Mexican caramel), and a mocha made with Rancho Gordo chocolate.

“The menu is a reflection of my childhood,” says Torres, “and I can see it in the faces of other Latinos that come in, they know and recognize these flavors, too.”

Latin culture is woven into the fabric of Phoenix, and Torres and Ponders are leaders here in the Phoenix coffee scene, but the true impact of latinidad on Phoenix’s coffee community is still emerging. “On the one hand, it’s not very present,” says Ponders, “but you know it’s there.” The city has had its share of talented Latinx baristas and trainers over the years, but on the ownership and cultural leadership level, Latin culture is just beginning to fuse with the wider third wave coffee movement. There is a hope beginning to burn for change, especially in the wake of recent events, and new leaders are rising up here in Phoenix to make those crucial next steps.

One of those future leaders is Lisette Barbera, a barista at Cartel Coffee Lab’s Sky Harbor Airport location. (Good airport coffee: we have that in Phoenix.) Barbera vehemently champions increased communication about the Phoenix Latinx community and the wider specialty coffee scene. “The Latinx community 100% influences our coffee community,” Barbera tells me, adding, “and we don’t speak about it enough!” Barbera sees this wider recognition in Phoenix as echoing back to coffee’s origin story. “We often forget the seasons of manual labor that families build their lives around,” Barbera reminds me. “There are so many brown and Black hands these beans have passed through. I am so proud as a hardworking individual, I get to serve these with my brown hands.”

She’s right, of course—coffee’s journey from origin to coffee bar takes on a special kind of synergy in a place like Phoenix, and in the hands of Latinx coffee professionals like Barbera, Ponders, and Torres. The realities of being a brown coffee professional in America’s current climate means living with the fear of erasure—the inescapable fear that one’s contribution to American society, in addition to just being will be dismissed. Even as the coffee industry repeats its refrain of uplifting coffee producers in Central and South American countries, those stanzas often fail to acknowledge Latinx coffee people on the retail end.

Those fears and anxieties are exacerbated by shameful political moments like the Arpaio pardon. “This whole week has been just one big flashing image of seeing yourself being disrespected and then having to continue in everyday life as normal,” Barbera tells me. It’s an experience many know all too well. “Clocking in and out of work, trying to entertain your friends and experience normalcy, but then you wake up with all these images in your head.”

I spoke with another Latinx Phoenix-area barista for this article, Lydon LaJoie of Kream Coffee. He reflected deeply on the events of that wild week in August, having also been in attendance at the counter-protest. “The protest started off strong,” LaJoie tells me, “and I went in humbly. I come from a mixed-race background but thought it was important I represent myself with that privilege.” Like many in the Phoenix community, Arpaio’s pardon brought back painful memories for LaJoie. “My heart dropped. Every time I heard ‘beaner’ or ’wetback’ growing up; every time someone asked, So what are you?; every time I held someone after their family had been torn apart; it all played in my head.”

“[Arpaio] is a symbol of fear, hate, oppression, and racism, there is no way around that,” LaJoie says. “I spent a majority of my life whitewashing myself because of him.”

Latinx coffee pros like Lydon LaJoie draw a lot of inspiration from examples like Jorge Torres, who LaJoie calls his “low-key hero” and “such an important part of this coffee community”—but there aren’t another dozen Latinx specialty coffee bar owners for me to profile. I wish there were; you hear a lot in the Phoenix coffee scene about “community first,” but it feels like our most marginalized communities aren’t being given the space or being embraced and championed by the city’s coffee scene.

The lack of what Ponders calls, “trade-based heritage” is something that plagues many Phoenix cultural communities. “I think that’s hurting us,” he says. “If I care about being Latinx, I’ll go to Puente, the human rights organization. As a journalist, I’m a member of the National Hispanic Journalists. But to not see something like that in coffee is strange.” Ponders with Pope the Poodle (center) and the author, Michelle Johnson.

But looking at it through a lens of optimism, Phoenix coffee is in a unique position to change this. What’s always been great about the city is its ability to be shaped and molded, as it is still generally under development. The vast amount of space in between everything allows room for growth, and the potential for the scene is still in the early stages of being fully tapped. And though their numbers may be small, the city’s Latinx coffee leaders are up to the challenge of advancing the city’s coffee space, a place for brown people of all backgrounds to thrive.

Torres plans to use the platform he’s created as a creative and thought leader in Phoenix to educate people and activate them, with events happening in his Futuro cafe space. “I want to do talks and educate those who aren’t personally affected because they have no idea.” For Torres, coffee becomes irrelevant in the midst of political turmoil, but he does acknowledge that it can be through coffee that we reach people to increased awareness and encourage empathetic thought on these issues. Barbera also wants to take action, but directly within coffee in Phoenix. Being a transplant from San Diego, I am still fairly new to the coffee community, but have noticed it lacking,” she says. “A lot of the coffee events I feel frankly left out of unless you are organizing yourself.” Barbera is working now with the team at Cartel to put on events to help build community and signal coffee’s wider role as an organizing platform. “Lately, I have taken it upon myself to do little events with Cartel’s help,” she tells me. “There I can be a physical representation of a brown, outspoken Mexican woman in a leadership role. That is so important to me, especially at a time when Mexican woman are still being portrayed a certain way by the media.”

Barbera goes on: “Phoenix has such potential for women of color to be in leadership roles. But I also understand I am going to have to do a lot of the footwork on my own here.”

That’s where the rest of the Phoenix coffee community comes in. Together with our Latinx colleagues, we can create the space needed to talk about these issues and connect with each other. Here in the Valley of the Sun, and in local coffee communities everywhere, we’ve reached a point where we can’t ignore bigotry and hatred and its expression in our society, both lawful and—in the case of Sheriff Joe’s modern-day torture camps—baldly unconstitutional. The Phoenix coffee community is a part of a wider community that is at an epicenter of southwestern Latin and Mexican-American culture. Through coffee, it is possible for Phoenix to lead the charge to shut out the hate and bigotry Latinx Americans face every day. In a city going through such a complicated identity moment right now—synonymous with both diversity and bigotry, a city of love and hate—I can think of no sweeter rebuttal than for Phoenix’s coffee scene to emerge as one of the country’s best, with Latinx coffee pros leading the way.

The post A City Of Love And Hate: Latin Culture Rising In The Phoenix Coffee Scene appeared first on Sprudge.