A Cafe In Puerto Rico Keeps Brewing After Hurricane María 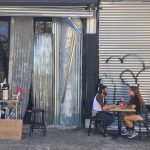 Everything is a coffee story if you dig deep enough, but the damage wrought by Hurricane María to the coffee industry on the island of Puerto Rico feels particularly specific and cruel. The storm’s path wrecked havoc across the island’s coffee growing regions, and continued difficulties with the dispersal of aid and basic necessities—electricity, running water—have made the business of simply roasting and serving coffee almost impossible, some three weeks after the storm first hit.

In the wake of yesterday’s important NPR reporting on Hurricane Maria’s effect on the coffee industry in Puerto Rico, we’re following up with an interview with Abner Roldán, the owner of Café Comunión in Santurce, San Juan and a two-time Puerto Rico Latte Art Champion. The opening of Roldán’s cafe has been delayed due to storm damage, and he’s currently serving coffee outside in front of the space in the Santurce neighborhood of San Juan.

This interview has been lightly edited and condensed for clarity.

Hello Abner, and thank you for speaking with Sprudge—by way of introduction, what is your background in coffee?

Hello—my name is Abner Roldán, speaking to you from Puerto Rico. I am the owner of Café Comunión and I am the 2014 and 2015 Puerto Rico’s National Latte Art Champion. Café Comunión’s new space was supposed to be opened by mid October, but due to some damages suffered because of Hurricane María, the opening has been moved a couple of weeks.

Describe the current scene today in Puerto Rico—has aid arrived? Is the power back on? Is it safe?

Today, after almost twenty days after Hurricane María hit Puerto Rico, there are still communities without access because streets and bridges disappeared. Most of the island is without water and electricity, supermarkets are empty, there’s no access to potable water, there are endless lines on gas stations and ATMs, and the local and federal government’s aid is ineffective and disorganized.

The main problem is distribution of goods and aid. We have received lots of donations, but the US military and local government haven’t created an efficient way to distribute them.

Hurricane María hit us fucking hard, but we're safe and ready to come back and finish what we started. We were on time to save all the equipment and everything that was inside. Our only damage was on the entrance. Our hearts are with all the families that lost everything because of the hurricane. Un abrazo.

How has the hurricane-impacted cafes and roasters in Puerto Rico? Do you have any idea how long it will be before they can reopen?

Puerto Rico has suffered a $200 million loss on the new coffee harvest. Our next harvest will be in at least three years, because of the lost trees. Coffee shops and roasters are very affected by these circumstances because most of the coffee that we sell in our coffee shops is from Puerto Rico. Most of these coffee shops have enough coffee for at least six weeks.

My main concern to me as a coffee shop owner is that I need coffee to serve in my business and since we will not have Puerto Rican coffee available in a few weeks, we will need to import green and roasted coffee from the United States. The main problem about importing coffee is that importing green coffee is illegal in Puerto Rico, and to import roasted coffee you have to pay $2.50 in taxes for each pound of coffee. Both circumstances are held by old laws that were created to protect Puerto Rican coffee and increase its sales. Now that Puerto Rican coffee will need at least three years for a new harvest, I believe both laws need to be modified.

Have you been able to make contact with people who work in the coffee growing portion of Puerto Rico’s coffee industry?

I have talked to coffee growers, pickers, producers, café owners and baristas and all of them are devastated by this tragedy. We are grateful to be alive, but most of us are jobless. Specifically, the growers and producers that will need to redefine their farms and find and income until they have a new coffee harvest in at least three years. Almost 100% of the coffee trees are gone or damaged. The eye of the hurricane (with the most powerful winds) passed by the center of the island, where most of our coffee farms are.

Is there anything about the current situation in Puerto Rico you think people outside the island might not know, or could be misunderstanding? What do you want people to know and understand?

First of all, a lot of people in the United States forget that Puerto Rico is a coffee producing country and that we are a U.S. territory. And because of this situation, we are unable to receive aid from other countries in the world. We are not asking for handouts, we are asking for what is rightfully ours because we also pay taxes.

What people may not know is that the reconstruction of Puerto Rico is not something that is starting now, after hurricane María. For the last three there has been an exponential growth of small local businesses that started to contribute with the development of a better economy for Puerto Rico. We are working to overcome María and keep doing what we started: to create small businesses, to shop local, to create jobs. What’s the hope for Café Comunión in the coming weeks? When will you open?

We were having our grand opening on October 16 but our entrance was damaged because of the hurricane. Right now, I’ve been selling drip coffee in the curb in front of Café Comunión to neighbors and pedestrians and I will continue doing that until we repair the entrance and can finally have our shop opened.

What do you think is the best way for readers on the mainland and around the world to support the Puerto Rico coffee scene right now?

People in the world should start learning about Puerto Rican coffee history and buy it as soon as we have a new harvest. Right now there is not an easy solution, what we ask is that the world doesn’t forget us.

Also, even if most of our touristic destinations are damaged or gone, you should still come visit us. We are a beautiful island with beautiful people.

The post A Cafe In Puerto Rico Keeps Brewing After Hurricane María appeared first on Sprudge.