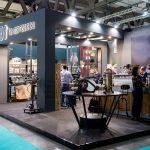 I went to Milan to look for the hottest new tech at HOST 2017—the coffee world’s premiere technological showcase—and I was not disappointed, thanks to a series of major debuts and serious tech upgrades from some of the biggest names in coffee. But HOST isn’t just a place to discover new products. Every other year for five days in Milan, this show becomes the global meeting point for coffee enthusiasts and tech leaders alike in coffee. It’s an occasion to get together and join in the conversation on industry trends, and maybe even catch a glimmer of the future.

My coverage of HOST Milan 2017 wouldn’t be complete without a spotlight on La Marzocco, the Florence-based espresso machine company currently celebrating its 90th year in business. La Marzocco’s True Artisan Café concept—in which the cafes that use La Marzocco machines take turns running coffee service at a custom LM bar—has become a mainstay at coffee events around the globe, and HOST was no different, with top Italian and American roasters splitting time throughout the week. But the real action for LM at HOST came with the company’s brand new Leva range of lever espresso machines, a huge attraction that set the tongues wagging across the show.

With a milestone anniversary to celebrate and a new machine to present at HOST Milan 2017, the stakes were high for La Marzocco. Here’s some highlights. In typical La Marzocco style, the brand wrapped up its 90th anniversary with a big celebration open to their friends, partners and the specialty coffee community.

Gathered under a festival tent with free-flowing Prosecco and Aperol Spritz, street food trucks and servers on rollerskates, we danced to retro Jamaican dancehall and R’n’B played by live band The Uppertones. A pop-up exhibition dubbed “Kustom Kulture” featured custom La Marzocco coffee machines in the style of 1950s hot-rod cars and motorcycles. The event also featured a formal debut of the Leva machine, a traditional cutting of birthday cake and thank you speeches, and the first-ever Leva latte art throwdown, which saw Italian latte art champion, Matteo Beluffi, win the top prize. The morning after the party I was back at the expo to visit La Marzocco stand, see the machines, interview the team and of course drink some coffee. The True Artisan Café–La Marzocco’s pop-up rotating roaster coffee shop concept–put more than 20 Italian coffee roasters on the spotlight, serving espresso to a mobbed crowd gathered to catch a glimpse at the Leva machines in action. La Marzocco’s Strada line of machines were also on display, serving up coffee from select global roasters like Five Elephant, Cafes Belleville, Campos Coffee, Koppi, Stumptown, Onyx Coffee Lab and more.

Rounding out the booth were installations dedicated to Modbar, the technology of modular, under-counter brewing equipment, as well as the La Marzocco Home line of premium home coffee machines, including the Linea Mini and GS3. The main attraction for La Marzocco at HOST Milan 2017 was undeniably the Leva, a new espresso machine that fuses lever-actuated espresso tradition with modern technology inspired by LM’s Strada line. La Marzocco made a sharp visual gambit in their booth by placing a vintage Fiorenza—Giuseppe Bambi’s original machine from 1927—next to the Leva in the booth. In a single glance, you could see the brand’s story, and watch its evolution.

I spoke with Enrico Wurm, La Marzocco’s Florence-baed Product Improvement Manager, who explained how the Leva was (to a certain extent) developed as a statement piece, and the hype it has created so far is somewhat surprising, though honestly, I struggle to believe it. Any new tech from La Marzocco is set to get people talking, and love it or hate it, the buzz created by Leva is undeniable. It’s the stuff of a thousand Instagam likes.

"Give me a Leva … and I shall move the world" – Archimedes.

“People want to see real machines,” Wurm tells me. “If I spend $4 for a coffee I want the barista to tell me what he’s doing, but I also want to see him do more than just press a button. I love watching the ritual of extracting coffee. It’s a return to the barista macchinista, the artisanal barista.”

Half of you thinks this sounds really cool; the other half just spit out your batch brew. That’s kind of the point.

The speciality crowd at Host seemed to be divided between fans of lever-actuated machines who can’t wait to get their hands on a Leva, and critics who believe that the Leva will make the barista’s job harder and slower than before. We’ll have to wait and see what the real-world feedback looks like when the Leva range hits the global market next year. When that happens, the Leva will be available in two versions. Leva X has four separate boilers for each group head and a digital display that shows real-time extraction pressure of the coffee puck, the pre-infusion time and extraction time as well as the pressure curve of the shot. Leva S has dual boilers for espresso brewing and for steam production and analog displays.

The Leva production has begun at the factory in Florence, Italy with the first 90 limited edition machines already delivered to select customers. In the US market, you can expect to see the Leva make its trade show debut at the 2018 SCA Expo in Seattle.

La Marzocco is an advertising partner on the Sprudge Media Network.

The post 90 Years And A New Machine: La Marzocco At HOST 2017 appeared first on Sprudge.